Evolva Wears Red in Support of Go Red for Women 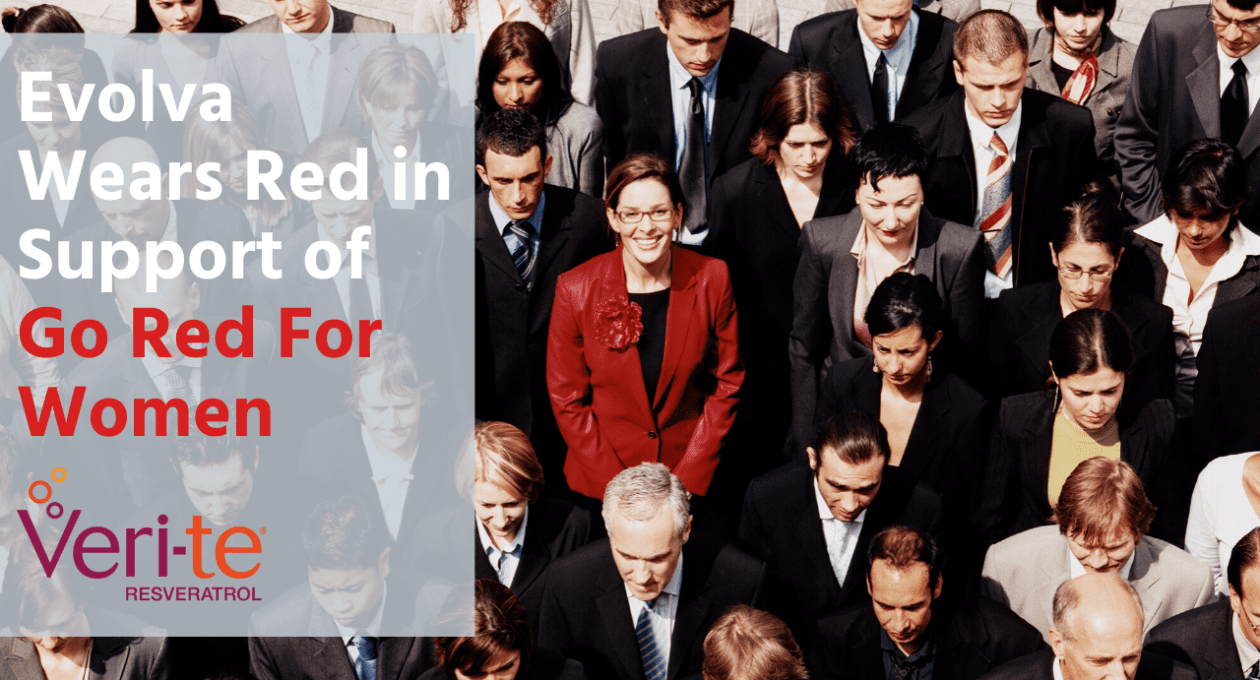 Are phytoestrogens such as resveratrol the missing link for women’s heart health?

Cardiovascular diseases (CVD) are the current leading global cause of death, with estimated numbers reaching 23.6 million deaths by 2030.1 Go Red for Women is the American Heart Association’s (AHA’s) campaign to raise awareness of the need to address cardiovascular health in women. 2 According to the CDC, only about half the population of women recognize heart disease as a significant threat to their personal health.3 So, today February 7th, Evolva wears red in support of the AHA’s campaign.

But why only focus on women?

In the news, media reports that women are less likely to suffer from cardiovascular diseases when compared to men. The fact is that younger women have a lower risk for CVD, but their risk increases considerably after menopause when estrogen levels decrease. After menopause, there is a significant decrease in the estrogen levels that, in combination with chronological aging, contributes to an increased risk of cardiovascular complications in women. Estrogen mediated protection against CVD is postulated to be primarily through protecting vasculature function in the heart and brain by decreasing vascular inflammation, for instance.4,5 Additionally, postmenopausal women are more likely to report poorer sleep quality and insomnia when compared to men, which are also considered as increased risk factors for CVD.6

Can resveratrol have an impact?

Resveratrol is considered to be a phytoestrogen as its cardioprotective properties have been proposed to be mediated through estrogen receptor signaling.7,8 Resveratrol has gained attention due to its cardioprotective benefits reported by the so-called “French Paradox” which correlated the low incidence of CVD in the French population, despite the high saturated fat diet, to the consumption of wine and later to the presence of resveratrol.9

Is there a gender difference when considering resveratrol supplementation for cardiovascular health?

The answer to this question seems to be affirmative. A clinical study in postmenopausal women reported improved cerebrovascular function with resveratrol at a daily dose of 150 mg.10 Other human trials have reported additional beneficial effects including increased estrogen metabolism, sex steroid hormone-binding globulin, improved mood and cognitive function, and a decrease in pain experienced by postmenopausal women.11, 12 Louis et al.  reviewed the cardioprotective effects of estrogen and resveratrol supplementation, mainly focusing on sex-dependent effects reported in preclinical and clinical studies.5 From the data analyzed, these authors concluded that resveratrol supplementation presents more favorable cardiovascular outcomes in women when compared to men.

A difference between the sexes?

Although there have been many clinical studies investigating the effects of resveratrol on cardiovascular health, there are conflicting reports for men and women. Several reasons can be pointed out, such as differences in daily doses administered (5 to 5000 mg), duration of treatment (from days to months), target populations (healthy versus diseased), gender (men and women), and clinical endpoints. One more important point that has gained attention lately is the lack of information on the extent of influence of the gut microbiota composition. In particular, the microbial-derived resveratrol metabolites as biologically active compounds can potentially be responsible for many beneficial effects, including improved cardiovascular health.13

Evolva not only wears red in support of this campaign today, but we are also genuinely committed to extending support to this area of research. Evolva funds and participates in well-designed clinical studies that provide our customers with science-based evidence for resveratrol supplementation in many areas, including women’s health.