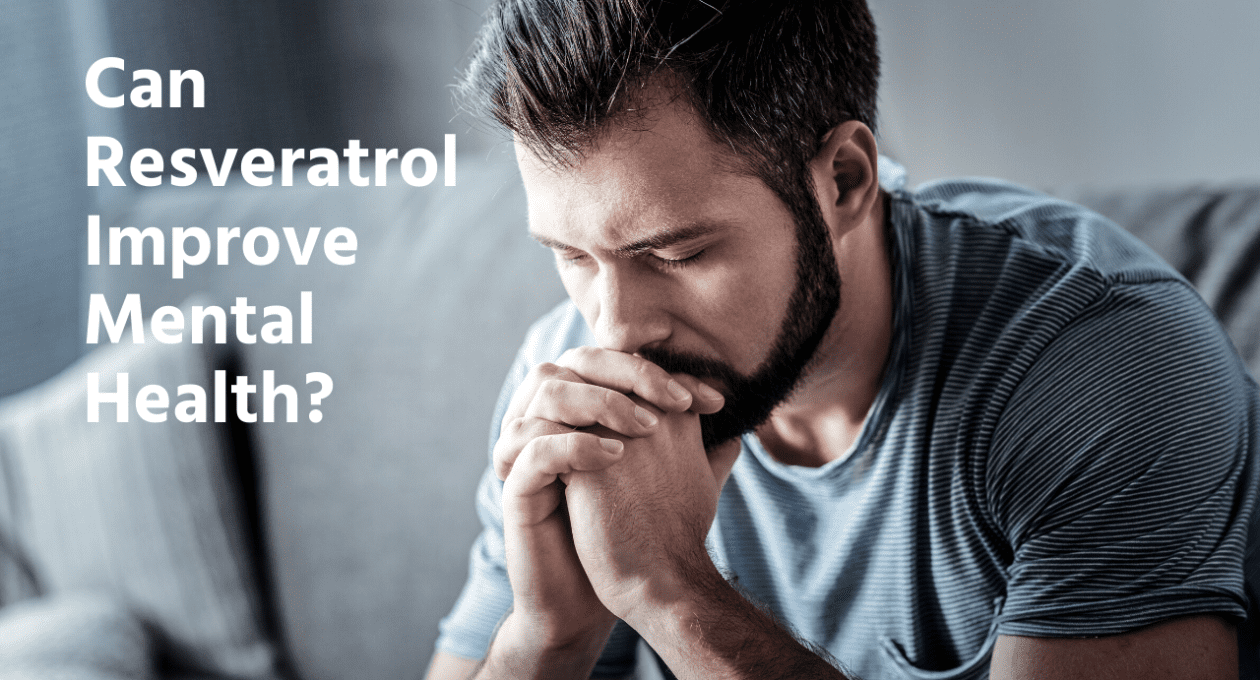 Mental health is a recurrent topic in the news media. Celebrities and government agencies highlight the necessity of openly discussing strategies to alleviate the burden of mental health and the need to seek medical attention when warranted. Several campaigns have been put in place to raise awareness, and in some countries, January is designated as “White January” to elevate education and prevention around mental health concerns. This focus is with due cause; as a report from the World Health Organization Global Burden of Disease cites, depression is anticipated to become one of the leading causes of long-term disability by 2030.

Now, for some positive news, there is growing scientific evidence that suggests polyphenols, and particularly resveratrol, have potential mental health-wellness properties and ultimately positive effects on the improvement of quality of life. Resveratrol is considered one of the most investigated compounds with more than 12,000 scientific publications, according to PubMed Medline (January 2020). So it is not a surprise that resveratrol is very often in the news spotlight. Recently it has been receiving special attention for its potential benefits on brain health with two recently published studies reporting resveratrol’s benefits on anxiety and depression in animal models.

Gu et al. (2019) reported interesting dose-dependent effects of resveratrol on the levels of dopamine, serotonin (5-HT), and BDNF (Brain-derived nerve growth factor) in mice. The study points out that low levels of neurotransmitters, such as dopamine and serotonin, are directly linked to the occurrence of depression. Therefore, increasing the levels of these neurotransmitters can alleviate the symptoms of depression. Additionally, Zhu et al. (2019) reported the in vitro and in vivo inhibitory effects of resveratrol on PDE4D (phosphodiesterase 4 subtype D). PDE4 inhibitors have been extensively investigated as treatments for disorders of the central nervous system, such as anxiety and depression. In particular, the inhibition of PDE4D seems to be responsible for the antidepressant effects of PDE4 inhibitors.

Although the articles bring important news on the potential mechanism of action for resveratrol, we cannot dismiss the fact that they are derived from animal studies. In vitro and animal studies unquestionably bring significant value to drug discovery, particularly related to the understanding of mechanisms of action.  However, these results would need further investigation in human trials to be substantiated.

After performing a pragmatic search on the primary science databases, very few human clinical studies were found. Among the studies, menopausal or postmenopausal women were the most frequent population investigated for the effects of resveratrol on depression and anxiety related to the quality of life (Wong et al., 2017; Evans et al., 2017). For instance, Davinelli et al. (2018) reported that the combination of equol (metabolite from soy isoflavones) and resveratrol administered for 12 weeks to menopausal women had a significant antidepressant effect.

Since a meta-analysis of clinical trials is considered to be the golden standard for scientific evidence, Marx et al. (2018) have conducted a systematic review and meta-analysis on the effects of resveratrol supplementation on cognitive performance and negative mood (including anxiety and depression) in healthy adults. These authors reported a significant improvement in negative mood; however, these findings only included three studies.  Therefore, there is a clear need for more clinical studies to support the beneficial effects of resveratrol for mental health.

The ultimate question is, what is the clinical evidence for the use of resveratrol as a coadjuvant for improving mood and quality of life? From the data available at the moment, we can only state that there is a potential for the use of resveratrol on alleviating some of the symptoms as there is still a clear need for better designed clinical studies to support the hypothesis.

We at Evolva are always working on scientific-based evidence coming from human clinical studies, which is our commitment to bringing facts to our customers around the science of resveratrol.